Your Mouse Movements could Save You from Identity Thieve

Your Mouse Movements could Save You from Identity Thieve 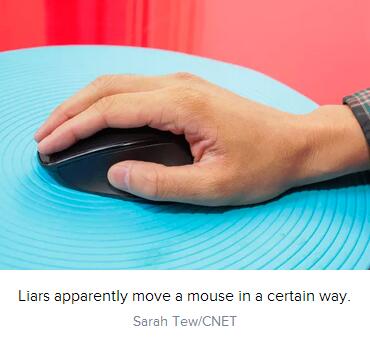 Mouse movements have already been catching lies for a while now -- but mostly machine-generated falsehoods. Several years ago, researchers discovered ways to detect robots online based on how quickly they click. In 2014, Google started using a similar feature for the "I am Not a Robot" test. If a mouse moves too quickly and unnaturally when clicking on the box, the clicker is apparently not human.

Now researchers are learning how to use mouse movements to catch humans who are lying. In a study published in the journal PLOS One last month, Italian researchers looked at how people move their cursors when they are telling the truth and when they are lying.

This could be helpful considering that identity thieves are always lying when they answer security questions like "what's your favorite band?" or "what city you were born in?" -- details that can easily be gathered in social engineering attacks.

The study gave 32 questions to 40 people, about half of whom were asked to lie with fake information they memorized. Some of the questions were obvious like birth dates, but others needed a bit of thinking to keep the lies going, such as naming their zodiac sign.

Curveball questions had influenced on how liars moved their cursors. They would start moving their mouse all over the place, the researchers found. For people answering truthfully, mouse movements did not change and followed a straight trajectory.

Here's how the trajectory broke down for mouse movements of liars and truth-tellers. The red line is for normal questions and the green line is for unexpected questions.
PLOS One/CNET

"Truth-tellers are supposed to be able to retrieve the responses about their true zodiac more automatically than liars, therefore, their response is expected to be more rapid, with fewer errors and characterized by a more direct mouse trajectory," the study said.

Using that data, researchers built a machine learning algorithm that could accurately detect 95 percent of the time when people were lying online based solely on their mouse movements.

But mouse lie detection can't sniff out identity thieves on its own. The unexpected questions apparently play a big role in outing liars with their cursor movements, which could end up as a new verification method.

"Unexpected questions require answers to be carefully crafted and this may be a limitation of online automatic usage of the technique," the researchers said.

Chat Online 编辑模式下无法使用
Chat Online inputting...
Thank you for your enquiry. We will get back to you ASAP